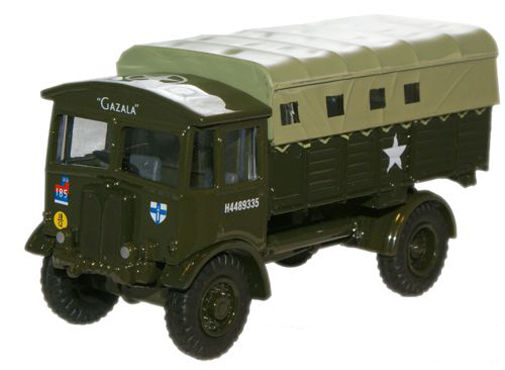 AEC Matador Artillery Tractor – Royal Artillery (France) The latest release on the AEC Matador artillery tractor is a replica of the vehicle operated by the British and Commonwealth forces in France during WWII, where it was used mainly for towing medium sized guns. The Matador was a typical AEC vehicle of the period, with flat fronted cab to accommodate the crew of one, a curved roof and a canvas backed rear load area. It was 4 x 4 vehicle with an AEC 7.6 litre engine and a speed of around 30 mph. Our model, as used by the British Army Royal Artillery, is decorated in drab olive with a grey canvas back and features the name ‘Gazala’ above the split windscreen. The Battle of Gazala, named after a small town about 40 miles from Tobruk in Libya, was an important in Libya, was an important WWII battle in the Western Desert Campaign, which took place in the middle of 1942. After WWII, the Matador continued in a useful role as a recovery truck and general-purpose contractor vehicle. As a 4 x 4, it was also used for off-road jobs such as forestry and even saw service as a showmans vehicle. So, perhaps we can look forward to many livery opportunities for further Oxford release on this versatile vehicle.