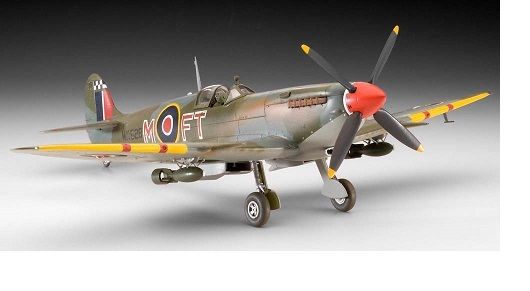 PAINTS & GLUE NOT INCLUDED IN THIS KIT

Apart from the Bf109 the Spitfire is the best known and most renowned fighter plane of the Second World War, with a total build of over 22,500. Numerous improvements and upgrades meant that it was continually becoming more powerful. In 1941 the German air force put into service the Focke Wulf Fw190A that proved its superiority over the current versions of the Spitfire. Some rapid problem-solving gave rise to the improvement of the airframe of the Spitfire Mk V by the incorporation of more powerful engines of the Merlin 61 series with a four-blade propeller. The earlier Mk IX variants were upgraded Mk Vs with different types of wings. From 1944 onwards the Spitfire Mk XVI went into production with the Merlin 66 engine. The first aircraft of the Spitfire type IX went into service with RAF No. 64 squadron in July 1942 and from then on proved to be an effective defence against the Fw190 in both the European and the Near Eastern theatres of war. The Spitfire was produced until the end of the war. A total of 5,739 of the Mk IX and 1,054 of the Mk XVI were built and served with 79 RAF operational wings, 23 Allied squadrons under RAF Fighter Command as well as 23 Canadian, 3 Australian and 9 New Zealand squadrons.