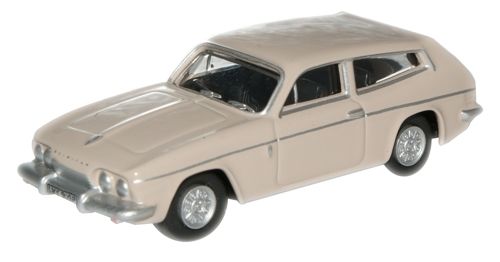 Another brand new car joins the current Oxford fleet of 1:76 scale sporting in the shape of the Reliant Scimitar GTE. The Reliant Scimitar was the model name used by the British manufacturer Reliant for several models of sports car during its lifetime. First introduced in 1964, the Scimitar name and various successive models lasted until 1990, when the manufacturing rights were bought by Graham Walker Ltd, who now builds Scimitar to order. This Gran Tourismo Estate version – with a top speed of 120 mph – was a fast, furious and prestigious drive, much favoured by the affluent rich and famous. It was courted not only by well-known TV, Film and pop star spanning three decades, but also by the Royal family, notably Princess Anne. Her Royal Highness received her first Scimitar GTE as a joint 20th birthday/Christmas present from her parents in November 1970. Since then, Princess Anne has had another eight Scimitars, all with the same registration number 4120 H. With both speed and a large luggage capacity, the Scimitar GTE suits her lifestyle and the Princess currently owns an example of the highly sought after. Middlebridge Scimitars, one of only 77 made by the company between 1988 and 1990, when it went into receivership