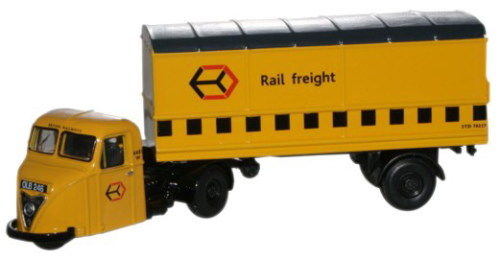 Scammell first introduced its “Mechanical Horse” in the UK in 1934. From the late 1920’s railway companies had been searching for a vehicle that they could use that would replace the horse drawn carriage. The London and North Eastern Railway initially approached Napiers and although they created a few designs the project was sold to Scammell Lorries where the Mechanical Horse was designed by O.D North. One of the unique features was that it automatically coupled and uncoupled with trailers. The Mechanical Horse was a large 3-wheeler with a steel frame with a wooden cab attached to it and came in two sizes with either a 3 ton or 6 ton load capacity. Power came from Scammell’s own 1,125cc side valve petrol engine in the 3-ton model and the 2,043cc engine in the 6 ton model. The unique thing about the Mechanical Horse was that its single front wheel could turn 360 degrees and so produced a highly manoeuvrable vehicle. The mechanical horse remained largely unchanged until the late 1940’s when the tractor section was redesigned creating the Scammell Scarab. The Scarab’s cab was more rounded and made from Steel and with the engine being mounted lower than in the Mechanical Horse the Scarab was much more stable.