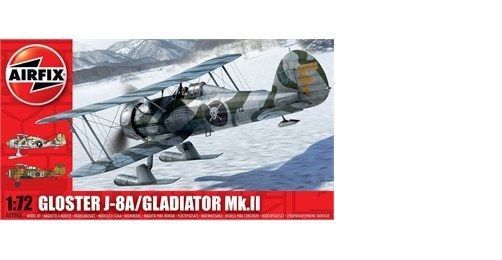 The Gloster Gladiator occupies an important place within the history of the RAF. The last of the RAF’s biplane fighters, the Gladiator had some modern features, such as an enclosed cockpit, a first for an RAF fighter, as well as an armament of four machine guns.

Still in service at the outbreak of WWII, the Gladiator proved to be a capable biplane fighter, but was outclasses against modern monoplane opposition. The mount of some of the RAF’s most famous pilots, such as Pat Pattle and Roald Dahl, preserved Gladiators cab still be seen flying today at Duxford and Old Warden air displays.

(Paints & Glue are not included)Safety Notice: WARNING Not suitable for children under 36 months. It contains small parts which can present a choking hazard. Please retain these details and address for future reference.